Gardiki Castle is a 13th century Byzantine castle on the southwestern coast of Corfu, between the villages Agios Matheos and Messonghi. It was one of three castles that would defend the island before the Venetian era, along with the Kassiopi Castle in the northeast and Aggelokastro in the northwest. The three castles formed a defensive triangle. The walls of Gardiki Castle form an octagon with eight towers. Unfortunately the interior of the castle is in ruins. It’s free to visit, but there is no explanation or any information about the history of the place. A good point to take a small walk when you going to Chalikounas or Prassoudi beach. 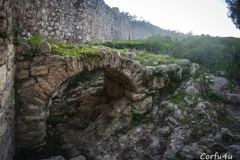 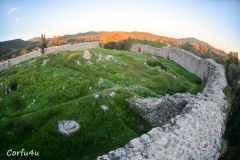 Tip: There is no parking area, but it’s not a popural turist destinaton, so it’s easy to find parking space by the roadside. Near the castle, there some restaurants to eat and relax.

Grava of Gardiki is a 20m length two entrances horizontal cave with archaeological interest. It is 400m away from the Byzantine fortress of Gardiki. Excavations found tools made of flint and animal bones, which have since been removed and are exhibited at the Archaeological Museum of Corfu. The findings are placed chronologically in the Upper Paleolithic Period. It is considered the oldest human settlement on the island. At that time Corfu Island was still geologically connected to mainland Greece. 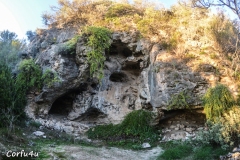 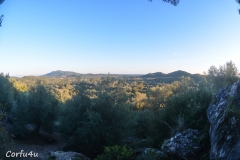 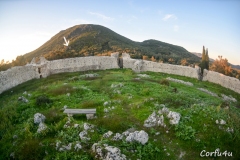 Tip: Not much to see, but it offers a wonderful view across the southern part of the island. Not suitable for someone unable to stand or walk easily.